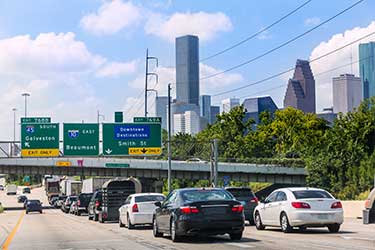 Houston is the 4th largest city in the United States and it continues to grow.  With the rise in population comes an increase in the number of car accidents and trucking collisions.  According to the Houston Chronicle, on an average, there are at least 2,777 car accidents a week. In approximately 40 of those collisions, someone will be seriously injured. In 11 of those crashes, at least one fatality will occur.

Houston also faces a significant problem with drunk driving.  According to the U.S. Census Bureau, Houston leads the nation for fatal crashes involving drugs and alcohol and ranks second in fatal accidents on Federal highways.

While some of the problems can be attributed to our population size, some other factors that contribute to the problem include:

Car accidents are not isolated incidents. Each time someone speeds focuses on his or her cell phone instead of the road or decides to get behind the wheel after drinking there is an increased chance of someone getting substantially injured or killed on the Houston roadways. While police enforcement can have a positive impact on driving behaviors, the best way to reduce the number of accidents is for each of us to do our part and make good decisions.

If you or a loved one was injured in a car accident, it is important to contact a legal expert to help you evaluate your options. Call (713) 987-7111 or send us an email to discuss your car accident injury case.

Houston Chronicle: Out of Control