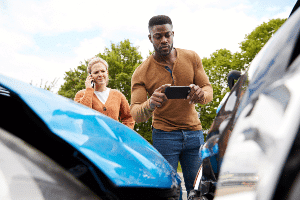 Motor vehicle accidents are an everyday occurrence on roads and highways across America. What’s becoming more common, though, are staged car accident scams. These scams are becoming more complex, and the FBI reports that they cost the insurance industry $20 billion annually. While a scammer may not target you directly, fraudulent accidents cause insurance premiums to increase and threaten the lives of innocent motorists.

But it is possible to combat these scammers. Dash cams, which aren’t too expensive, can help your case if you become a victim. Car accident lawyers will also be of great help when dealing with insurance companies.

What Are Staged Car Accidents?

A staged crash is when a driver causes an accident so they can file a personal injury claim on a fake injury and collect an insurance settlement. The vehicles suffer minor damage compared to the large amount they are demanding. In the end, they usually make off with a large check while your insurance costs increase.

Fraudulent crashes mainly happen in urban areas where there are many cars. Drivers also stage them in wealthier communities because they believe residents will have better insurance plans. The people who fake these accidents typically target new or rental cars as they’re generally well insured. They also tend to target women driving alone and senior citizens since these groups tend to be less aggressive.

Staged accidents are thorough and planned out well in advance. While their vehicle may only receive minor damage, they’ll claim exaggerated or non-existent injuries. Here are a few common staged accidents to look out for on roadways.

The scammer will travel in front of you while the passenger observes the driver behind them. The second that the rear driver takes their eyes off the road, the scammer will brake immediately, causing the vehicle behind them to run into the back of the scammer’s car.

A scammer will wait at an intersection for someone to drive past them and then speed to hit the side of their victim’s car. These staged accidents will typically have another person on the street to watch the accident and serve as a witness. Often, the staged witness will say you ran a red light, which may make you liable for the accident.

This scam occurs when you merge or have to cross paths in front of another car. The scammer will wave you into their lane, but as you begin to merge over, the driver will increase their speed and collide with you. They’ll also deny waving you into their lane.

Multiple scammers are involved in this scheme. One will drive in front of you while the drivers flanking you maintain your speed drive in the adjacent lanes. The front car then brakes suddenly, and the other vehicle will block you from swerving out of the way, forcing you into an accident.

There are ways you can avoid staged accidents. The easiest way is to exercise extreme caution on busy roads. Not keeping enough space between your vehicle and the one in front of you leaves you vulnerable to rear-end collisions.

If you’re approaching a light that just turned yellow, it’s best to stop and wait for the next green light. The “witness” in these schemes is watching your light and communicating with the driver to let them know it was yellow when you went through the intersection. Since the “witness” will claim the light was red, you’d most likely be liable.

After an accident, especially if something seems off to you, call the police. It’s always good to have a report that you can reference later. The report will describe damage to both cars and any on-site injuries. In addition to the police report, you should also take photos with a timestamp, so there’s photographic evidence of both vehicles.

You shouldn’t have to suffer the consequences of a staged car accident. If you believe you were involved in one, reach out to the attorneys at Sutliff & Stout. They’ll conduct a thorough investigation of your accident and the events leading up to it.

Our car accident lawyers have the experience needed to assist you in holding scammers responsible for the damages they caused. Call (713) 987-7111 or complete a contact form to schedule a free consultation.