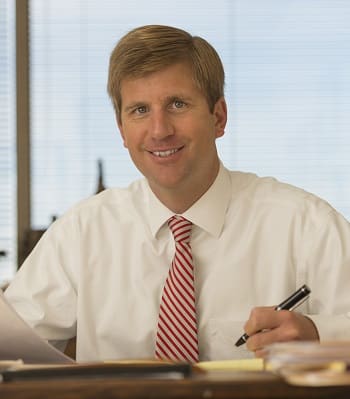 Graham E. Sutliff, a Board Certified Personal Injury Attorney, grew up in San Angelo, Texas in a family of six. From an early age, in this close-knit West Texas town, he learned the value of hard work, determination and fighting for what is right. Graham and his now partner Hank, who became friends at age four, found an early interest in the law by playing in the halls of the Tom Green County Courthouse. As a young man, his interest in the law continued to grow and he set out to find a way to use this passion to help others.

Upon graduating, Graham began his legal career in the Austin litigation section of Vinson & Elkins. There, he represented a diverse client base ranging from Fortune 500 companies to small businesses to private citizens. His practice included personal injury, securities issues, contract disputes, and everything in between. While at Vinson & Elkins, Graham had the privilege of practicing law among some of the top litigators in the United States.

In 2008, Graham and Hank co-founded Sutliff & Stout, Injury & Accident Law Firm to protect the rights of individuals facing the daunting task of litigating against big insurance companies and corporations. Throughout his career, Graham has remained committed to upholding the values instilled in him from an early age – hard work, determination and fighting for what is right.

Graham has successfully tried jury and non-jury trials in both state and federal court. On a daily basis, he sees the physical and emotional impact that others’ carelessness has on his clients and their loved ones. Graham’s greatest satisfaction comes from ensuring that his clients and their families get the representation, and ultimately, the justice they deserve.

Graham is Board Certified in Personal Injury Trial Law and has been selected as a Texas Monthly Super Lawyer since 2012.

Outside of work, Graham enjoys spending time with his wife and two children.