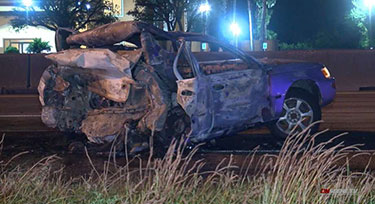 A male driver was driving a silver Toyota Corolla northbound on the North Freeway when his vehicle became disabled in a moving lane of traffic.

When he got out of his vehicle to check on it, he was struck by another driver of a black Nissan Rogue. The impact of the collision caused the man to become pinned underneath the SUV and caused the car to burst into flames.

The male driver was pronounced dead at the scene.

The female driver of the Nissan was not injured. She did not show signs of intoxication and was released from questioning. A female passenger in the Nissan suffered non-life-threatening burns to her body and was transported to the hospital.

Several other wrecks happened after the initial collision.

Officers will continue to investigate and review all factors that may have led up to the accident and police reports will be made available in ten days.