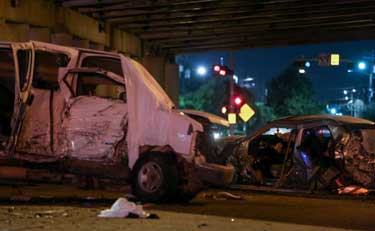 HOUSTON (October 22, 2018) -A group of construction workers on their way to work was caught between two vehicles involved in a road rage incident.

Reports indicate that an argument escalated at a nearby nightclub before each person got on the road. The three-vehicle collision happened around 2:15 a.m. at the intersection of I-45 feeder and Airline.

The driver of the workers’ van suffered minor injuries. A front passenger died and another person had possible injuries to his liver. Among the three vehicles, six people were taken to the hospital.

Investigators are testing the at-fault drivers for alcohol. There is a chance that the drivers may face an intoxication and a manslaughter charge.

The crash remains under investigation and crash reports will be made available in ten days.

UPDATE: Man Charged with Intoxication Manslaughter After 3-Vehicle Crash on I-45

Police have charged 22-year old Luis Gaspar for his role in a deadly road rage crash that killed an innocent man on I-45 early Monday morning.

Gaspar has been charged with intoxication manslaughter for the collision that killed an innocent man and sent passengers to the hospital. A group of construction workers was heading to work in a white van when the accident happened. Enrique Rodriguez has been identified as the front passenger of the van that died on the scene.

Gaspar admitted to drinking four beers that night. Prior to the collision, Gaspar and the driver of the Chrysler got into an argument after they bumped shoulders at a local club in the flea market. Gaspar and the driver of the Chrysler chased each other on Airline, ran a red light at the intersection, and collided with the workers’ van. Gaspar was arrested after the crash.

Tuesday morning Gaspar appeared in court where more details about the night came out that led up to the deadly crash. The judge set bail for Gaspar at $40,000. He must have an ignition interlock installed in his vehicle and stay away from drugs and alcohol. The name of the driver of the Chrysler has not been released.

If you or a loved one were involved in car accident, it is important to contact a legal expert to help you evaluate your options. Call (713) 987-7111 or send us an email to discuss your car accident injury case.

If you or a loved one were involved in car accident, it is important to contact a legal expert to help you evaluate your options. Call (713) 987-7111 or send us an email to discuss your car accident injury case.