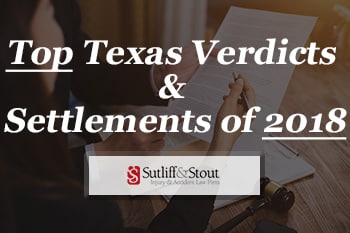 Sutliff & Stout, Injury & Accident Law Firm has been recognized on Texas Lawyer’s list of the Top Texas Verdicts & Settlements of 2018 for the firm’s multi-million dollar cases.

Sutliff & Stout represented the Estate of Adam C. Pegoda and Mary Pegoda in a wrongful death suit against Carl Haude and James Oxspring.

Mr. Oxspring was driving his SUV when he attempted to pass an 18-wheeler driven by Mr. Haude.

Mr. Oxspring lost control of his vehicle when he struck and killed Mr. Pegoda while he was checking his mailbox.

As a result, the arbitrator found negligence and awarded the plaintiffs $3.3 million in damages.

The firm represented Tyler Neves in a negligence case against Bobby Cox Cos., Inc. Mr. Neves was entering his parked vehicle when Mr. Fierro’s 18-wheeler struck the back of Mr. Neves’ vehicle. Mr. Neves suffered from neck, back and shoulder injuries.

Sitco Services, owned by Deborah and Sitman Wainwright, held a contract to install a new sign for a Sonic Drive-in restaurant.

Bobby Wainwright, son, and the electrician was working on installing the electrical wire when a 175-pound spool of wire fell on him causing multiple injuries.

The parties settled prior to trial for policy limits of $1 million dollars.

Graham Sutliff and Hank Stout are the founding partners of Sutliff & Stout, Injury & Accident Law Firm in Texas. As Board Certified, Personal Injury Attorneys, Sutliff & Stout believe that every individual, regardless of wealth or social standing, is entitled to the highest quality legal representation.