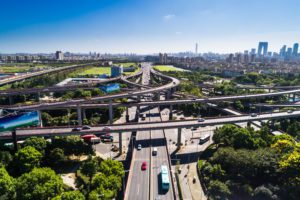 For Texas residents, a Houston crash is a deadly event. A Houston Chronicle analysis of 16 years’ worth of federal highway data has named Houston as the deadliest major metropolitan area in the nation for drivers, passengers, and pedestrians. The report states that roughly 640 people die each year on Houston-area roads, and about 2,950 more are severely injured. So, whether you call Houston home or you just frequent the area, there are a few intersections you may want to avoid more than others.

Why Are Houston Roads So Dangerous?

The Texas Department of Transportation (TxDOT) reports that there were 68,682 motor vehicle accidents in 2019. A few reasons the Houston area is becoming so dangerous to drive in are:

Some of the most significant safety risks at intersections are speeding, unsafe left turns, and failure to abide by the right-of-way.

What Are the Most Dangerous Intersections for Pedestrians and Cyclists in Houston?

LINK Houston, a nonprofit agency that advocates for a robust and equitable transportation network in Houston, released a report in 2018 that depicted the following intersections as the most dangerous for pedestrians and cyclists:

Pedestrian–vehicle accidents often lead to severe injuries that can lead to death.

Most Dangerous Intersections Overall in Houston

Car accidents happen everywhere in Houston, but there are twelve intersections that have been deemed to be the most dangerous overall, regardless of whether you are a driver, passenger, or pedestrian:

Four-way intersections tend to draw the highest volume of traffic, which often creates inefficiencies and leads to road rage, which increases accident rates.

If you or someone you care about has been injured or killed at a dangerous Houston intersection, you may have the right to pursue compensation for your damages. At Sutliff & Stout, our team of experienced Board–Certified personal injury attorneys have the extensive knowledge required to formulate a solid defense for your claim.

Call us today at (713) 987-7111 or complete a contact form to schedule a free, no-obligation review of your personal injury case with an expert accident Houston car accident lawyer.