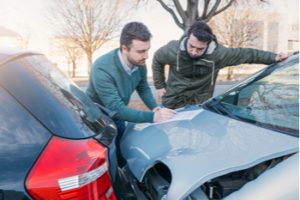 Car accidents happen every day. In the Texas Department of Transportation’s most recent Crash Fact report, 12,161 car crashes resulted in 14,908 injuries in 2018 in Texas. Many of these accidents were so severe that not one day went without fatalities in Texas that year. Thankfully, a significant portion of these accidents only caused minor injuries. No matter how severe the accident was, insurance companies will need one piece of critical information when seeking coverage after the accident, and that’s who was at fault.

Insurance companies seek to mitigate the value of claims, so when covering damages caused by car accidents, their goal is to pay out as little as possible. One thing to remember is to never admit fault. After an accident, you need to be careful about what you say to your insurance provider.

While some accidents are complicated, several types are generally simple when it comes to determining which party was at fault. Keep in mind that no accident is the same, and although some accidents seem cut-and-dry, the details can complicate the case. The Houston car accident lawyers at Sutliff & Stout detail the most common scenarios below:

One of the most direct types of accidents are rear-end accidents. This occurs when one vehicle collides into the back of another car. One reason why this type of accident is simple to handle is that they occur so often. According to the National Highway Traffic Safety Administration’s Crash Statistics report on rear-end collisions, about 30% of all two-vehicle collisions during a one-year study involved rear-end accidents. The most common cause of rear-end car accidents is distracted driving.

Rear-end collisions happen most frequently at these locations:

Accidents from running a red light are often caused by:

These types of accidents are so dangerous because there’s very little protection on the sides of vehicles, compared to the front or the rear. In most instances, the driver who ran the red light is at fault for causing the accident.

When drivers need to turn left, it can be dangerous because they’re crossing the path of oncoming traffic. That is especially dangerous at intersections when turning without a green turn light. When turning left on green, drivers are expected to yield to oncoming traffic and wait until there’s enough space to turn safely – even if that means waiting for the next light.

At busy intersections, turning left on a solid green light can take a while. The driver turning left might grow frustrated and quickly turn left in front of oncoming traffic when it’s not safe to do so. Drivers with more experience are usually more patient and will wait for a safe opportunity to turn, while drivers who are in a hurry might be more apt to make a risky left turn. The result can be fatal and cause a pileup on the intersection if oncoming traffic crashes into the left-turning vehicle. If the cars are driving fast enough, the sheer force of the collision can push cars into others in the intersection – causing a catastrophic accident.

Parking lot accidents are generally the least dangerous (and most frequent) out of the four most common accidents. Because they suggest low speeds, injuries are typically minor. Sometimes, however, the impact can be significant enough to cause soft tissue injuries in a driver’s back and neck.

The most common type of accident that occurs in parking lots include:

In the scenarios involving a driver pulling out of a parking spot, that driver is responsible for causing the accident. The last two situations can be a little more complicated to determine who was at fault. A knowledgeable and experienced attorney will be able to analyze the accident’s facts and determine liability in these instances.